Why Linux Is More Accessible Than Windows and macOS

Artificial intelligence and Internet of Things (IoT) applications in numerous gadgets are paving the road for a better tomorrow, especially for those with disabilities. Voice recognition technology has advanced dramatically, while facial recognition continues to make device access easier for those with disabilities. (Why Linux Is More Accessible Than Windows and macOS)

Linux is widely regarded as a difficult operating system. Its list of technical characteristics, on the other hand, does not fail to meet people’s needs. Aside from its unique qualities, the kernel’s improvements and different adaptations have made it a popular choice among the general public.

Here’s how you can benefit from Linux as a differently-abled person:

1. The Importance of Personalization

Customizations and adjustments are critical, particularly when working with persons who have specific needs. People can personalize their system because of Linux’s open-source nature, which allows them to change it to suit their needs.

Consider the following scenario. And consider a colorblind person who has trouble distinguishing between colors. They may have to overcome significant obstacles in operating systems such as Windows and macOS to modify the colors of system icons.

Linux, on the other hand, makes things easier to use by allowing users to choose the colors, size, and even the appearance and feel of their system-centric icons. In this manner, you can construct a Linux system that is tailored to your specific requirements.

2. Linux is a dependable and stable operating system.

Everyone requires dependable software, but this requirement is heightened for those with disabilities. For obvious reasons, you don’t want a lot of defects in software that caters to a specific group of individuals.

On the contrary, open-source software is supported by a wide developer community, and nearly anyone can change it in order to correct flaws. Because most Linux software is open-source, the user experience is smooth and seamless.

Linux runs on the same kernel as the majority of the company’s data servers around the world. An excellent user Linux experience is built on the foundations of durability and reliability.

3. Linux Can Be Installed on Older Computers

Updating hardware on a regular basis is difficult for people with disabilities. Updates keep a system’s health in check by resolving problems and installing necessary security patches, but they come at a cost. Older hardware is rendered outdated by new updates.

Disabled persons require an operating system that can support outdated hardware while being functional for an extended period of time. The recent uproar over Windows 11’s TPM 2.0 requirement demonstrates how quickly outdated technology becomes obsolete. Every update makes the operating system even clunkier than before.

Linux, on the other hand, is a small operating system that can run on older computers. You can always find a Linux distribution that works well on your machine. Other operating systems, such as Windows and Mac, make it impossible to find such long-term support for obsolete hardware.

4. Users have complete control over Linux.

It’s pointless to utilize an operating system that prevents users from exploring new things because of built-in limits. Instead of tailoring the working technical environment to the user’s needs, most operating systems believe in changing the user’s behavior.

Linux, on the other hand, gives the user ultimate control and ownership of the platform by sharing every line of code. Given Linux’s inherent nature, interoperability, and endless support for each of its distros, you can always try new technologies.

You can examine each line of code to determine whether or not an application’s security and privacy features satisfy you. This openness is critical for establishing confidence between the user and their everyday drivers.

Comparison of Accessibility Between Linux and Windows, which is better?

Windows and Linux are two of the most widely used operating systems, both of which support a wide range of devices. Both operating systems are equipped with excellent accessibility features. Let’s look at the several tools they provide for people with disabilities:

Accessible-Coconut is a Linux distribution for people with disabilities 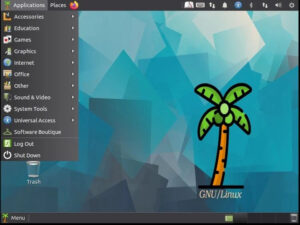 Accessible-Coconut is a Linux distribution designed specifically for visually impaired people. MATE Desktop is included with the distribution, which is based on Ubuntu 20.04. It comes with a number of essential pre-installed applications that eliminate the need for the user to install anything.

All accessibility tools can be found under the Accessibility tab. In that part, you’ll discover a screen reader, on-screen keyboard, magnifier application (Magnus), and a Braille writer.

There are a few other features for blind users, such as high-contrast text and bounce keys, that make this distro suitable. Accessible-Coconut is a great distribution for the visually impaired because of its valuable features and quick access to the accessibility tool.

Linux has a lot of special features for people with disabilities. Linux is the best solution for anyone with specific needs because it allows you to customize and control your machine. In the future, community support and compatibility with new technologies will only grow. If you want to make your computer more accessible than ever, you should consider Linux. Please send your feedback. Goodbye!