Over the years, I’m sure I’ve experienced my fair share of sleepless nights. For the past 25 years, I’ve wished for some type of magical technology that shuts down the volume on the world, from inebriated tourists to barking street dogs, from noisy late-night pubs to housemates snoring loud enough to wake the neighbourhood. I’ve tried a dozen different types of earplugs, as well as noise-canceling earphones and headphones more recently, but have yet to find anything that effectively reduces noise while being comfortable enough to wear for eight hours.

As a result, when I first noticed QuietOn’s crowdfunding campaign for their “noise-canceling earplugs,” I was intrigued and pleased to see that it had met its financial target. A few months later, the business contacted me to ask if I’d be interested in trying out a pair of the now-completed earbuds. Or, to put it another way, a test nap.

The QuietOn 2 earbuds are simple gadgets, unlike most of the gear I examine these days, which tries to cram in a hundred different features. They don’t have Bluetooth or built-in storage, so you can’t use them to listen to music, podcasts, or anything else. There is no app, and there are no configuration choices beyond a single button. They’re designed solely to block out noise and aid sleep: nothing more, nothing less. 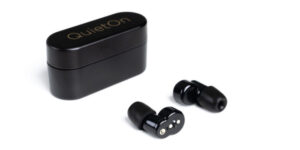 This button toggles between the “silent” and “hearing” modes, both of which are self-explanatory. The first allows noise cancellation, while the second allows outside noise in. The earbuds come with a set of medium-sized silicone tips, as well as smaller and bigger pairs to help you find the perfect fit. The battery life is rated at 20 hours, so each charge should last a couple of nights.

The charging case is powered by the micro-USB cord that comes with it, and there are two blue LEDs on the front that light up when each earbud is charging and turn off when they’re finished. It takes a little over an hour to charge. Because the case has no battery, you’ll need to charge the earphones with a USB power source. Because of the lengthy battery life, this isn’t as much of an issue as it could be, and you can always use a power bank if necessary.

The earbuds came in a small box that included the case, earbuds, cord, tips, and little instruction books in a variety of languages. The cover was compact and lightweight, with the corporate logo printed on the front and magnetic inserts to keep the earphones‘ charging pins in place. 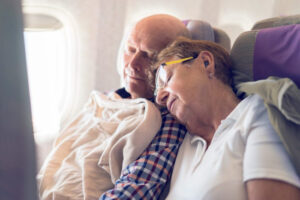 The earphones themselves were quite little, far smaller than any wireless earbuds I’d previously used. Of course, it’s hardly a fair comparison because they don’t have to incorporate speakers or Bluetooth technology, but still. These are the only earbuds I’ve ever had that entirely fit into my earlobe when in use, with no protrusions.

The first step was to determine the correct fit after topping up the charge level till the case’s lights turned off. Because it appears that the tighter the fit, the better the noise cancellation works, I spent some time playing with the various choices.

It was a little tricky to remove and replace the tips, but the large ones seemed to block out the most noise, so that’s what I went with in the end. It took some practise to get the earplugs in, but it wasn’t difficult. Push the rubber tip of the earbud into your ear canal with the rest of the earbud pointing upward, then rotate it backward to secure it.

There’s not much to say about utilising the QuietOn Sleep because, as previously stated, they’re rather basic devices. The only way to change modes is to press the small button located between the two charging pins. The raised button, despite its small size, is easy to locate with a fingertip and makes it clear which mode the earbud is in.

However, I’m not sure I’d prefer to switch modes instead of simply removing the earphone when I need to listen to someone. It’s nice to have the choice, I suppose. Each earbud is self-contained. Despite the fact that I didn’t sit down with a stopwatch to test the battery life, the earphones were still functional after two nights of use.

When they become flat, though, there is no warning: the noise-canceling simply ceases. When you take the earphones out of the case, they turn on automatically and turn off when you put them back in. You won’t be able to turn them off any other way, so keep them in the case while they’re not in your ears.

Even though I’m used to wearing earplugs, I didn’t find the QuietOn buds to be bothersome either sitting upright or sleeping on my back for long amounts of time. I’ve been sitting at my desk all morning writing this review with them in, and I haven’t felt the need to remove or even touch them. They were also comfy when I tested them for an hour on the sofa with an afternoon sleep. Being a gear reviewer is a difficult job. 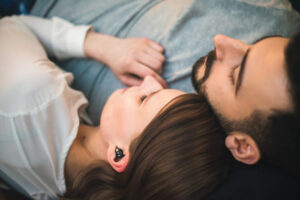 If you sleep on your back (or when sitting up in an aeroplane seat), these earbuds will most likely be comfortable for you. However, if you sleep on your side or front, like I do, it might be a different storey. For several nights, I tried to sleep with the earbuds in my ears, but I could never keep both of them in for more than an hour or two.

The rough plastic casing pressed awkwardly onto the ear that was lying on the pillow, despite the buds fitting within my earlobe. Changing my head position helped a little, and there was a sweet spot where I didn’t notice them as much, but I’d wake up again as soon as I dropped off to sleep and shifted my head slightly.

Noise was an issue if the earbuds moved on the pillow, as it has been with every previous set of earplugs and earbuds I’ve worn in the past. The vibration is conveyed and magnified within the ear canal due to the airtight seal, and it sounds remarkably loud. In the end, I resorted to sleeping with a single earphone implanted in my “outside” ear. It didn’t block as much noise as I’d hoped, but it did help me sleep better.

There are two fundamental ways to keeping noise out of your ears: passive noise isolation and active noise cancellation. Earplugs and earmuffs use the former to physically block sound from entering your inner ear. The latter analyses the incoming sound with microphones, speakers, and technical wizardry before playing an opposing waveform to cancel it out. The QuietOn 2 is capable of both. I tried a couple different ways to see how effective they were:

Overall, the QuietOn earphones delivered on their promises. They were more effective than foam earplugs, but not as effective as over-ear headphones. That was true for all frequencies, however I did notice a slight increase in sound transmission in the mid and upper ranges. That’s to be expected: the earphones are optimised for lower frequencies like snoring and jet engine noise, according to the makers.

The occasional rumbling of a car or truck passing by could still be heard, but it was considerably quieter than usual and wouldn’t have woken me up if I had been asleep. One thing to note is that the fit of the earphones in my ear had a considerable impact on the performance of both passive and active noise suppression. They let in a lot more sound when using the tiny or medium tips, or if the earphones weren’t positioned precisely.

The initial type of QuietOn noise-canceling earplugs was designed specifically for airline passengers. The ideal use case is to block out cabin noise while sitting upright in your seat, and some airlines have agreed to sell the company’s devices inflight. Making a sleeper version is far more difficult, so congratulations to the corporation for doing it.

If you sleep on your back and have a noisy environment (or a noisy companion), these earbuds will most certainly provide true benefit. They block out more noise than traditional earplugs, stay in place for longer periods of time, and are more comfortable to sleep in than other wireless earbuds or (particularly) headphones.

They’re a tough sell if you sleep on your stomach or side. You may or may not have the perfect combination of ear shape, pillow, and placement to sleep comfortably and soundlessly all night. At the very least, the company has a 14-day return policy, so you can always check them out and see what you like.

The expense is another concern. The QuietOn 2 costs 199€/$199/£179, which is comparable to noise-canceling earphones such as Apple’s Airpods Pro or Sony’s WF-1000XM4. The QuietOn earbuds are still the superior choice if sleep is your top priority.

If not, and you only have enough money for one set of noise-canceling headphones, you’d be forgiven for choosing one that can also play music and make phone calls. So, here’s the last word. The QuietOn 2 earbuds aren’t for everyone, but their small size, extended battery life, and strong noise suppression make them a suitable option for some.

If that sounds like you, use the code TMA10 at checkout to save 10% on your purchase. Note: The QuietOn 2 has been superseded by a new model that is smaller, more comfortable, and has a longer battery life. Our entire review of the QuietOn 3 can be found here.

What Is Telemetry and How Does It Work?

What are Businesses Doing to Guarantee Accurate Inventory?

Benefits of Using Customized Boxed Packaged Goods for Your business

What Is Telemetry and How Does It Work?