How to Check the Remaining Battery Time in Windows 11

When you glide your mouse over the battery symbol in Windows 11, you’ll find there’s no projected time left. There is no clue on how long you can anticipate running on battery power; just the battery % is displayed. Let’s look at checking the projected remaining battery life on Windows 11.

In Windows 11, Microsoft has decreased the usefulness of the Taskbar. There is no option to enable comprehensive battery information on the hover menu, such as the projected remaining battery time.

If you want to know how much time you have left on Windows 11, go to Settings, System, and Power & Battery. Under the battery %, there is information about the projected time remaining. It may take up to 30 seconds for these facts to appear on the screen. 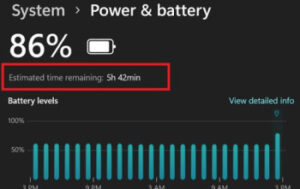 Alternatively, you may track battery performance using a standalone battery app.
For example, if you have a Dell computer, you can check the battery’s remaining hours using the My Dell app.

It’s critical to know how much battery life you have left, especially if you’re traveling and don’t have access to a power source. Many people agree that hovering your mouse cursor over the battery symbol on the Taskbar to verify the predicted battery time is far handier than going to the Settings page.

Because it was not an accurate measurement tool, Microsoft presumably eliminated the estimated time remaining option. As a reminder, with Windows 10, the projected time left was regularly adjusted based on your load. Regrettably, that was never an accurate portrayal.

Microsoft should perhaps add additional battery-related features to the Windows 11 Taskbar in future upgrades. If this change is genuinely inconvenient for you, you can revert to Windows 10.

When you hover over the battery symbol on the Taskbar in Windows 11, the estimated battery time left is no longer displayed by default. On Windows 11, go to Settings, System, and Power & Battery to see how much time you have left.

What are your thoughts on this specific taskbar modification? Do you believe Microsoft should bring back the estimated battery life option in Windows 11?

Microsoft Email Scams: Everything You Need to Know

Microsoft Email Scams: Everything You Need to Know