How To Take Screenshots On Snapchat Without Them Knowing?

Snapchat is one of the most popular photo-sharing apps these days. Users now use this app to share their snaps, and it is an essential part of their lives. But it does not allow you to save others’ snaps privately and send notifications whenever you screenshot or save a picture. Our article aims to provide you with the method to take screenshots in Snapchat without them knowing.

Many users often search this question: How to Take Screenshots On Snapchat Without Them Knowing? Techinbusiness experts have answered this question in detail. Read the whole article to know how you can take Snapchat Screenshots without them knowing.

How Can I Take Snapchat Screenshots Without Them Knowing? (Android and iOS)

Making use of the built-in screen recorder

Using the built-in screen recorder on Android and iOS is the simplest Snapchat screenshot hack.

The screen recorder may be found in the Quick Settings panel on Android 11.

To get started, simply tap on it.

You may now take a screenshot of the Snapchat story from the video recording.

The built-in screen recorder feature on iOS can readily assist you with this. You only need to tap on the option in the Control Center to enable the feature. If the feature isn’t already there in your Control Center, you can enable it with a few simple steps:

Making use of a screen recorder application

This is yet another way to use Google Assistant to discreetly screenshot Snapchat on Android. The steps are straightforward:

However, there is one drawback: you won’t be able to save the screenshot directly to your gallery; instead, you’ll be allowed to share it with other platforms. You must send it to your email or another platform, where you may keep it.

This process is straightforward and requires little effort. The following are the steps you must follow:

Making use of third-party applications

There are some third-party programs that can preserve a Snapchat snap without anyone knowing, similar to how third-party apps can save a WhatsApp Status. They are available for download through the Google Play Store.

SnapSaver (Android) and Sneakaboo (iOS) are two apps that may be used for this purpose, and the process is rather simple.

All you have to do now is download and open the app.

Go to Snapchat and choose from the available options (Screenshot, Screen Recording, Burst Screenshot, and Integrated).

Open the snap you want to preserve, tap the SnapSaver camera symbol that appears on your screen, and a screenshot will be taken without telling the person. 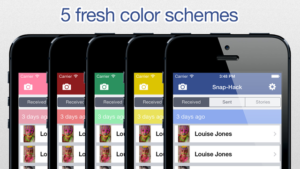 You’ll need to download the app and check-in with your Snapchat credentials. All of the new Snapchat Stories will display in the app, and all you have to do now is capture a screenshot of them while they’re playing. The other user will not be notified of the screenshot as you finish your job.

Using a different smartphone to record

This is another way to screenshot a Snapchat story without them knowing. Simply capture a picture of a Snapchat image or record a movie of a Snapchat video with another smartphone.

After that, you can edit the photo or video you captured, as well as save a copy of other people’s Snapchat Stories without their knowledge.

Another Snapchat screenshot hack, although this one takes a little more effort. To cast your device to an external device, such as a smart TV, you must use the screen mirroring option (which may be found in your smartphone’s Settings).

After that, you’ll need to access Snapchat and record your Snapchat video or photo using a different device. After a few tweaks, you’ll have someone else’s Snapchat Story, and they won’t even realize it.

How Can I Snap a Snap Without Them Knowing? (Mac)

There is an easy method for taking screenshots on Snapchat without anyone realizing it. To complete the process, you simply need to enable QuickTime Screen Capture. This is why:

After you’ve completed the setup, press the record button, open Snapchat, and you’ll be able to screenshot Snapchat without being notified.

On a Windows PC, you can take a Snapchat screenshot by installing an Android emulator and launching the Snapchat app.

Is it feasible to find out whether your Snapchat has been screenshotted?

Snapchat notifies users if their snap has been screenshotted. There are various ways to grab a screenshot on Snapchat without alerting others.

Is it against the law to take a screenshot of a Snapchat story?

It is not against the law to take a screenshot of a Snapchat story. If you’re going to screenshot someone’s story, make sure you have a good reason.

Finally, I hope my above-mentioned simple techniques will assist you in taking a screenshot on Snapchat without alerting the other party.