If you want some free work-at-home advise this epidemic winter, here’s mine: invest in a set of noise-canceling headphones. They’re less expensive than a divorce and less difficult than murdering your neighbours. All things considered, they’re also less bother. The Soundcore Life Q20 are Anker’s entry-level Bluetooth noise-cancelling headphones, and they’re priced significantly lower than similar competitors’ offerings.

The Sony WH-CH710N costs at least $20 more, and comparable Beats by Dre, Sennheiser, and Bose models are also more expensive. In our Soundcore Life Q20 review, keep the pricing in mind. They are, by far, the cheapest Bluetooth noise cancelling headphones available, at least from a reputable manufacturer.

I put the headphones to the test by wearing them every day for three months.
(I intended to write the review sooner but didn’t have time.) I listened to everything from Glenn Gould’s five-volume Bach for solo piano to Bruce Springsteen’s music with heavy bass lines, and everything in between.

The headphones’ strength is the sound quality they provide for the price. They brought up the intimacy of solo piano more than I expected, which can be a genuine test for headphones. You’re likely to accept a certain level of loss if you’re listening to solo piano at home with entry-level Bluetooth headphones. I didn’t feel frustrated in the least. I think I heard a little too much of Gould’s humming from time to time.

The headphones performed admirably when it came to mainstream music. I had no complaints once more. The deeper percussion sounded great, and the vocals, guitar, and saxophone were all strong enough. Higher-end headphones will provide a larger soundstage, making you feel as if you’re in the room with The Boss and Steven Van Zandt before the Sopranos. 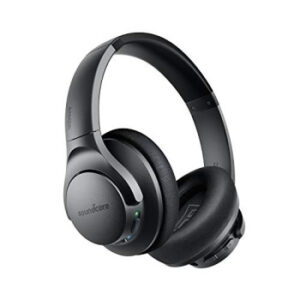 However, I believe you will be hard-pressed to find a better listening experience for the money. There’s also a bass enhance option, which made the sound significantly worse. What had been crisp before had become murky and drab. The sense of intimacy began to vanish. It’s a scenario that allows you to not just imagine what it’s like to wear a subpar pair of headphones, but also to feel it firsthand.

While I respect Anker’s foresight in including a feature that makes their product worse, I wouldn’t suggest it to others. The bass booster was never used again. The noise cancellation is adequate. This will be the deciding factor for many. Many of us tried to muffle out the sound of a roommate or spouse taking a call during the pandemic.

People have had to lift my headphones off my head in order to attract my attention. Even when listening to music that only uses a small portion of the spectrum, such as solo piano, this is true. I am not claiming that the noise cancellation is flawless. Noise cancellation will be more accurate and effective with a higher-end pair of headphones. However, it served my purposes well.

The headphones are light, weighing roughly 260g (9.2oz) in the UK, or about the same as a typical block of butter. The headband is thick enough to be comfortable, and I didn’t experience any discomfort or headaches after wearing them for lengthy periods of time, as I had with other headphones. The memory foam earcups are sufficiently comfy.

The only minor flaw is that the headphones pinched the temples (also known as “arms”) of my spectacles. This, however, was not the case with any other pair of headphones I’ve ever worn.

Both earcups have control buttons. Volume and track (as well as the outrageously thrilling BassUp setting) are controlled by a slider on the right earcup, while power and noise cancellation are controlled by buttons on the left earcup. Everything works as predicted, and the slider/button placement and design are intuitive.

The headphones’ structure appears to be sturdy enough to me. There are no visible weak places that could break over time with regular use. Earcups that fold are a regular feature. While folding them firmly will be difficult, it will make the headphones slightly less unwieldy to put away or store in a bag. If space is a concern, earbuds are likely to be a better option.

The headphones have Bluetooth 5 technology, which means they have better sound and range than earlier generations. If you’ve been dissatisfied by previous Bluetooth headphones, you’ll be pleased to learn that the compromises between convenience and quality are now far less visible. With each of my devices, pairing was a breeze.

My primary gripe with the headphones is that the quality of the microphone they provide over Bluetooth isn’t good enough to utilise for calls. To use your headphones as a headset on Windows 10, adjust the audio device setting to “headset.” The first thing you’ll notice is a dramatic reduction in sound quality. The sound quality is on par with my (awful) laptop speakers.

The major problem is that the microphone is so terrible that it’s useless. I’m guessing that this is partially due to Bluetooth’s limits, and partly due to the desire to keep the price as low as possible. Anker was most likely forced to choose between microphone and sound quality, and it chose sound quality.

If you want to use these headphones as an all-in-one item that can switch between music and calls, I suggest you look for something different. These headphones aren’t going to cut it, and you’ll be dissatisfied (along with anybody you’re talking to). You’ve been given fair warning.

Anker claims that the headphones have a 40-hour battery life. My headphones never hit that limit, but they lasted long enough that I only had to recharge them once a week or less. They’ll last long enough for any workday, weekend getaway, or long-haul flight (remember those?) that you won’t need to bring a micro-USB charger with you.

Except for use as a headset, the Anker Soundcore Life Q20 are a very reasonably priced pair of headphones that perform adequately or well in every aspect. The sound and noise cancellation are good enough to filter out unpleasant background noise, and they’re comfortable enough to keep you from getting a headache (especially if you don’t wear glasses).

In truth, most people who buy the Anker Soundcore Life Q20 will be trying out Bluetooth noise cancelling headphones for the first time. This is a terrific buy for these individuals, especially considering the price. Recommended.

The Best Portable Wi-Fi Extenders for Travel in 2021

The Best Portable Printers of 2021